Last week, former PERA Executive Director Miller Hudson penned an op-ed for the Denver Post, arguing that PERA’s situation has improved to the point where we need not worry about it, and that no further tinkering with it is necessary (“There is no need for panicky ‘fixes’ to PERA“).  Unfortunately for the taxpayers of Colorado, Mr. Hudson’s comforting conclusions are belied by some uncomfortable facts.

Let’s begin with where Mr. Hudson places the blame for the current funding problems.  He identifies one of them correctly – overly generous benefits that amount to promises that cannot be kept, except at great expense.  He is also correct that the dot-com bubble was fool’s gold for the legislature, which led it to create the overly-generous benefits.

But PERA’s portfolio managers (who predate Mr. Hudson’s tenure as Executive Director), allowed the fund’s investments to become dangerously overweight in volatile stocks, in effect letting their winning bets ride.  When the dot-com bubble burst, so did PERA’s funded ratio, and it continued to decline throughout the decade, recovering only slightly in the mid-00s: 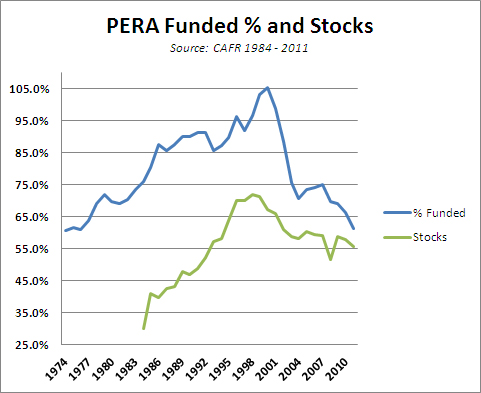 This chart also shows the folly of relying on long-term returns to determine a fund’s solvency.  If a plan is underfunded, adding additional return may look like the way to catch up.  But along with that additional reward comes additional risk and volatility.  When the portfolio has a bad year, as in 2000, 2001, and 2008, it doesn’t have the option of drastically reducing its payout that year, as you or I would with our own retirement accounts.  The need to pay benefits regardless of the fund’s annual return can put it in a hole that it can never recover from.  PERA’s estimate of 8% may indeed be a realistic return over 30 or 40 years.  But benefits need to be paid when they need to be paid, and the results of this thinking are all too obvious in the above chart.

And while the legislature rarely met its Annual Required Contribution (a contribution set by Government Accounting Standards Board, and designed to ensure actuarial soundness), this shortfall was only a relatively minor factor in the fund’s increasing unfundedness.  According to the chart below, had the legislature made the ARC every year from 2000 on, the State and School Divisions, which comprise the overwhelming part of PERA, would only have been about $4 billion better-off last year.  PERA admits to a $23 billion unfunded liability, although there is reason to believe it is much larger: 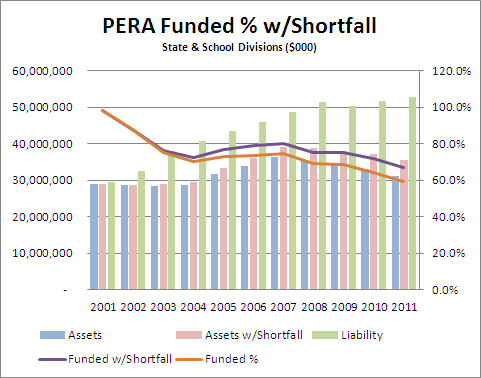 Mr. Hudson also argues that, because overall, PERA contributions account for less than 3% of public spending, the burden is light.  This ignores that for many entities – school districts, in particular – PERA spending is eating up an increasing portion of their operating expenses: 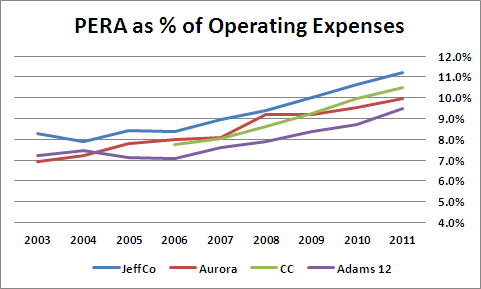 This is a result of the very supplemental payments (SAEDs) that are designed to save the system from ruin.  PERA is correct that the supplemental payments were envisioned as being shared between the districts and their teachers.  But with many, if not most, school boards under the thumb of the teachers’ unions, they have decided to have their districts absorb the entire supplemental payments.  This means that as of 2011, for four major Denver-area school districts, roughly 11% of their operating expenses were going to teacher pension plans, money that could have gone into the classroom.

Mr. Hudson tries, implicitly, to discredit those who are concerned about PERA’s fiscal condition by claiming that it is only “in recent decades” that concern has grown up around the unfunded liability.  While it is true that in the past, PERA has been significantly under-funded, two conditions make that of greater concern now.  First, the PERA unfunded liability is much larger now as a percentage of the state GDP, meaning that should a fix become necessary, the pain to the state’s taxpayers will be considerable greater than it has been in the past.  In the 1980s and early 90s, the unfunded liability hovered around an unthreatening 2% of state GDP.  That has since grown to 9%: 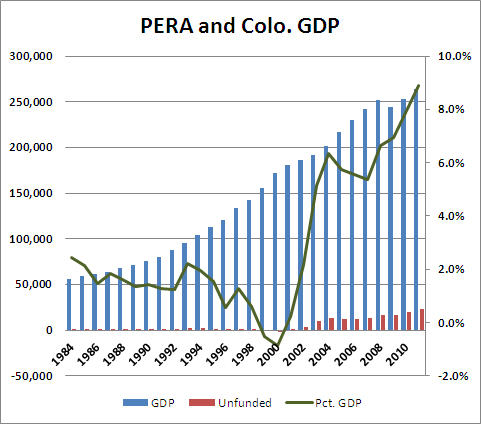 Second, since PERA has an unfunded liability, it means that some of its current expenses are paid for by current employees.  (A fully-funded program would, by definition, have all current expenses in the bank.)  The ratio of current employees to retirees has been falling for decades, as well, meaning that any increases in contributions will fall more heavily on future employees and future taxpayers: 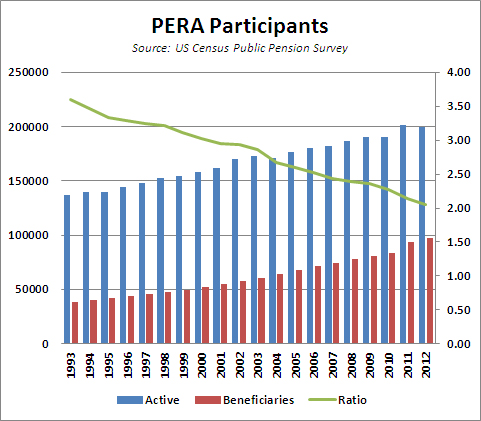 As part of his rhetoric, Mr. Hudson contrasts the concrete – and real – improvements from SB10-001 with unnamed and undescribed “fixes” proposed by those who worry about PERA’s financial condition.  This leaves the reader to imagine all sorts of horribles.  Let’s look at some of the “panicky” fixes proposed in the state legislature over the last several years:

It is telling that each of these changes – every last one – has been opposed by PERA and its allies in the public employees unions here in Colorado.

And it’s enough to make you wonder who’s really panicking.

Joshua Sharf is a research associate in fiscal policy at the Independence Institute, a free market think thank in Denver.  This article originally appeared on his blog, View From a Height