Last Friday, the Denver Post carried a story about PERA’s “celebration” over a 12.9% return on its investments in 2012, and how it allegedly puts to the lie to State Treasurer Walker Stapleton’s concerns over the solvency of the pension plan.

Would that it were so, but PERA is, as usual, spiking the football on this one too early.

First, let’s start with the return itself.  12.9% is good, but it’s not exceptional, as PERA returns go.  It’s above the 8% that they assume over the next 60(!) years, in order to get the funds to be solvent over that time, to be sure.  And it’s only possible because a higher return means a higher volatility.  As we’ve said before, PERA only needs to have a couple of bad years to fall so much further behind that it can’t catch up.  This year’s modest gains in its funded levels could easily be wiped out by even a couple of average years that see positive returns in the 5% range.

As an aside, we should also note that PERA’s returns follow the returns of the much larger California pension system, CalPERS, almost exactly: 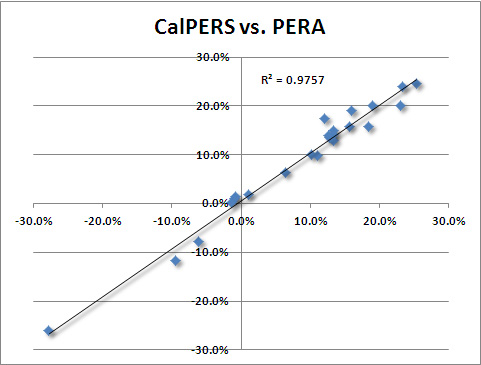 The 12.9% is below PERA’s self-imposed benchmark of 13.4% – with Alternative Investments doing the worst relative to its benchmark.  It’s right at BNY Mellon’s Median Public Fund average return of 13.0%.  And it’s right in line with what you’d expect, given CalPERS’s 13.3% this past year.  If PERA is willing to declare victory for missing its own benchmarks, and doing just about as well as everyone else, we should perhsaps be asking what we’re actually getting for all that money management staff we’re paying.

Worst, though, is that PERA’s situation really hasn’t improved all that much, and remains far worse than they’re willing to admit.  PERA discounts its liabilities using the expected rate of return on its investments, per the Government Accounting Standards Board (GASB) rules.  There are a number of problems with doing this, first and foremost being that it encourages funds to take on more risk in order to appear better-funded.  It’s also unsound financial economics.  Every other pension rule in the world requires the fund to use its parent entity’s long-term cost of borrowing.  In this case, that would be best approximated by Colorado Certificates of Participation, currently trading at 5.3% yield.  PERA provides a sensitivity analysis of various discount rates, and it’s not too hard to extend it back to a rate of 5.3%.   (There’s also a very slight change in the actuarial value of the assets; I’ve included that just for completeness). 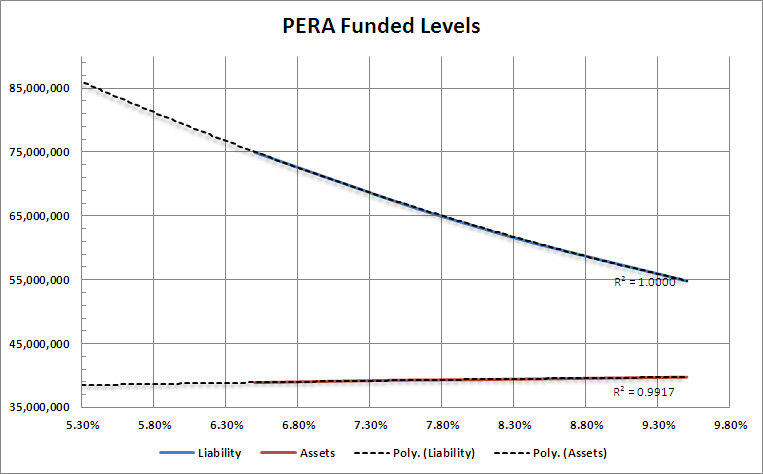 So basically, properly calculated, instead of having the unfunded liability of just over $24 billion that PERA admits to, it’s actually in the hole for about $47 billion, or about $23,500 per household.  A more accurate number could be gotten with a more detailed analysis, but this is probably within a billion or two dollars, which suddenly doesn’t seem like all that much money.

PERA likes to claim that the actual unfunded liability doesn’t really matter all that much, since it can’t ever be called in tomorrow, but must wait until it’s actually due.  Like so much else PERA says when it comes to its unfunded liability, this fundamentally misunderstands the nature of present value.  The point isn’t whether or not a liability can be collected tomorrow.  Present Value is just a means of comparing a future liability and present assets in today’s dollars, a way of asking how much you would pay today for the promise of the amount of the liability tomorrow (or whenever it’s due).  It has nothing to do with whether or not such an immediate transaction is possible.

However, we can calculate how much the unfunded liability will mean to Colorado families when they have to make it up.  Right now, a $23,500 debt, paid at PERA’s assumed return of 8% over 30 years, is about $2,000 per family, per year.

Joshua Sharf is a research associate in fiscal policy at the Independence Institute.  This piece originally appeared at View From A Height, where Joshua blogs.