During the 2008 presidential campaign, Senator John McCain, the Republican nominee, made a campaign appearance in Pueblo, Colorado. He was asked about western water issues – as national candidates invariably are when visiting the Centennial State – and his answer baffled the crowd. He was from Arizona, but had never really been much involved in water issues. He knew distribution of the Colorado River was a sore subject for his own constituents, so he relied on a line he had often used on the campaign trail back home. He said it was past time the outdated and unfair old Colorado River Compact should be “renegotiated.”

John McCain had no idea what a hornet’s nest he had stepped into in Pueblo, but several people immediately told him. National party leaders quickly explained to him that you can never say that in Colorado – a state whose history, economy, culture, and way of life are inexorably tied to the Colorado River, and whose leaders will never stand for “renegotiating” the delicate legal contract that allocates its waters. Colorado is th 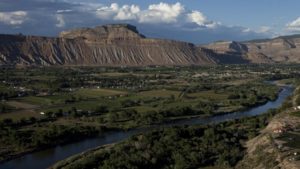 e only state on the River that has never used its full entitled share, so any change in the allocation, by definition, means taking water away from Colorado. McCain’s campaign issued a correction, assuring Colorado voters that he would protect their water against thirsty downstream cities, and against federal control.

What if candidates like McCain had no reason to care about Colorado voters? What if the only votes in the West that mattered were those in California? Unfortunately, we may not have to wonder about such a hypothetical question – it could soon happen.

Colorado’s Constitution allows for a “citizen veto” when the legislature misbehaves. It has not been used for several decades, but the process is well underway now. Signatures are being collected around the state, to give voters a chance to decide the matter in the next election.

The Electoral College may seem outdated to some, because the outcome of elections does not always suit them. But that system is the only reason small states like Colorado matter at all in national elections. It forces candidates to pay attention to the less populated states, especially “swing states” like Colorado, which can be won by either party. However, winning the national popular vote would require winning only nine states – and Colorado is not one of them.

Interestingly, the debate so far is mostly about whether candidates would still visit small states. Proponents argue that the Electoral College can thwart the will of a plurality of voters (that has happened in five of the 58 elections in American history). Opponents simply ask, do we really want to surrender our voice in national elections to states like New York, Florida, Illinois – and worse yet, California?

Remarkably, neither side has yet discussed the potentially disastrous effect of such a change on major Colorado issues – such as water. Californians hav

e long sought to reopen the legal agreements governing the Colorado River, because Los Angeles desperately needs more water. Why wouldn’t some future presidential candidate be tempted simply to give it to them?

Forty million people in seven states rely on water from the Colorado River. But because only Colorado has unused water, there is no other source for California to increase its share, except by using some of Colorado’s. Considering that Colorado has 3.7 million registered voters, and California has over 20 million, why would any intelligent candidate promise to protect Colorado’s water from California?

The threat to Colorado water is obvious enough, but it isn’t the only threat to smaller states posed by this ill-advised scheme. Think about the formula for distributing federal highways funds, which is based partly on population and partly on the miles of roads to be maintained. Candidates might readily agree to change that formula, sending funds to the big cities where most people live. Then, who will maintain the long lonely miles of rural highways that are the lifeblood of the West?

The need to guarantee a voice to all states is not outdated; it is vital. That is why Congress was split into two Houses, one based on population, but the other giving equal voice to all states, large and small. That balance is just as important now as when the Constitution was written in 1787.

Mike Strang, who served Western Colorado in the Statehouse and in Congress, often campaigned on a simple two-issue theme: “Don’t let ‘em raise your taxes, and don’t let ‘em take your water.” That’s still sound advice, but if Coloradans give away their vote to the nine big states, who’s going to stop ‘em?

Greg Walcher is former director of the Colorado Department of Natural Resources.  A version of this article originally appeared at his website.