Last week, the director of the Civil Rights Division for Denver’s Regional Transit District (RTD), Kenneth Hardin, was indicted for having allegedly “corruptly solicited and accepted money from a person intending to be influenced and rewarded in connection with RTD business.”

Federal regulations require transit agencies that receive federal funding “To ensure nondiscrimination in the award and administration of DOT-assisted contracts.” The best way to “ensure nondiscrimination,” the regulations go on to say, is to set aside a specific percentage of contracts for “disadvantaged business enterprises.” By definition, a “disadvantaged business” is one that is at least 51 percent owned by minorities, women, or other “individuals who are both socially and economically disadvantaged.”

In other words, and something that will not surprise anyone familiar with American civil rights laws, the rules require that agencies ensure nondiscrimination through discrimination. In RTD’s case, the agency is committed to making sure that at least 15 percent of its contracts go to disadvantaged businesses, and Hardin’s job was making sure that happened.

The indictment claims that Hardin, who is reportedly paid more than $110,000 per year (which probably includes benefits as his 2012 salary was just under $80,000), accepted bribes totaling $5,100. I have no idea if Hardin is guilty, and it seems difficult to imagine that someone would risk a cushy job like that for a few thousand dollars. But this is just one more example of how the federal government is messing up America’s transportation system.

Transit is supposed to be about moving people, especially people who don’t have access to cars. But today transit has taken on so many other jobs that the goal of providing mobility has been all but forgotten. Among those jobs, transit is supposed to get people out of their cars, relieve congestion, reduce air pollution, reduce greenhouse gas emissions, encourage developers to build and people to move to more livable communities, provide living-wage jobs, and, of course, make sure that minority-owned businesses get the proper share of federally funded contracts. No doubt there are many more goals and targets that come with federal funding and political control in general.

All of these goals and rules and regulations create a system that invites the kind of corruption suggested by this indictment. But, more important, they distract from RTD’s actual mission, which is to provide mobility.

“Government will malperform if an activity is under pressure to satisfy different constituencies with different values and different demands,” wrote Peter Drucker in his 1989 book, The New Realities. “Performance requires concentration on one goal.”

The West light-rail line, which opened in May, 2013, is just one example of how poorly RTD has performed. According to the 1997 major investment study for this line, this line was projected to cost $250 million which, after adjusting for inflation, is about $350 million in today’s dollars. It actually cost $709 million, and even then they didn’t double-track the last couple of miles as originally planned.

The major investment study also considered a bus-rapid transit on high-occupancy vehicle lanes as an alternative. The analysis concluded that it would cost half as much but provide 88 percent as many benefits (measured by number of hours saved by travelers), making it far more cost effective than light rail. Yet RTD chose the rail alternative instead. It is worth noting that, as rail costs doubled, the cost of the only major bus-rapid transit line that RTD is building grew by just 8 percent. 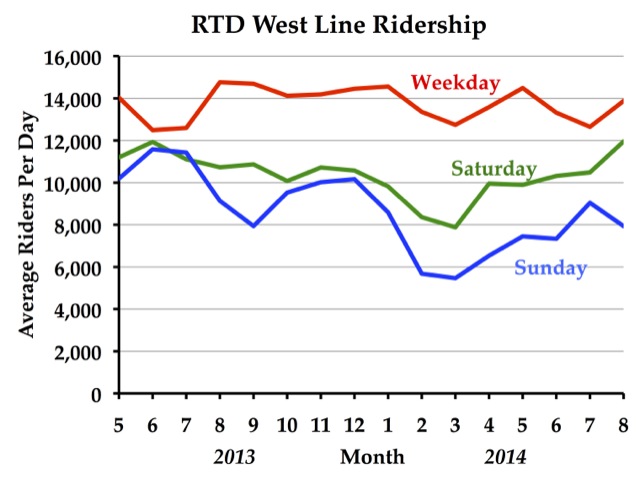 The 1997 West line study projected that it would carry an average of 20,000 riders each weekday in its first year of operation. As shown in the chart above, which is based on RTD spreadsheets, it never came close, averaging 13,800 weekday riders in its first year and not improving in its second.

Would RTD have picked rail if it had known that rail costs would double and ridership would fall more than 40 percent short of expectations? It might have if its goals included being (as one Denver lobbyist explained light rail to me) “a WPA program for Colorado contractors.” But if its sole objective was to increase regional mobility, rail would never have been given serious consideration.

This is just one more reason for the federal government (and, in fact, government in general) to get out of the transportation business. By turning market transactions into political transactions, the government takeover of transit has made it a creature of special interest groups, not a vehicle for mobility for people who need it.